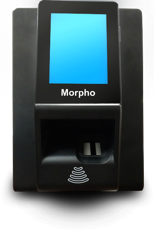 Control access to your press production system with support for a variety of RFID and barcode readers, as well as biometric devices, such as fingerprint scanners.
Now you can prevent non-authorized personnel from accessing critical press systems and more accurately control who can change settings on a subsystem by subsystem basis. This interface works with the built-in access control for the 5100-APC, the 5100-MPC, the 5100-AMC, the 5100-AMC-Servo, the 1200 Tonnage Monitor, and the 2600 PLS & Die Protection Systems. Card/badge readers or biometric scanners, such as fingerprint readers, replace passcodes to prevent unauthorized changes to job parameters that could damage or destroy your valuable machinery.
Scalability

Each terminal in this scalable interface can recognize up to 64 different identities.

Instead of having to enter a code for changing a job parameter, your employee can use an employee card or fingerprint to log in.

Up to 16 user-defined security profiles can be defined for selection by card or fingerprint, so different people are allowed to do different tasks.

The interface works with almost any kind of reader that can communicate serially. Use existing employee RFID badges, barcodes, fingerprint readers, or other modes of access that work best for your operations.

Since 1972, we’ve engineered thousands of press productivity, safety, and efficiency solutions for the metalforming industry, and our Intelligent Press and Automation Controls are expertly designed to improve your long-term ROI at a modest cost.
Learn More
Get Started Today
Take the Next Step

Let’s discuss how we can engineer a highly configurable solution for you that improves press productivity, safety, and efficiency.